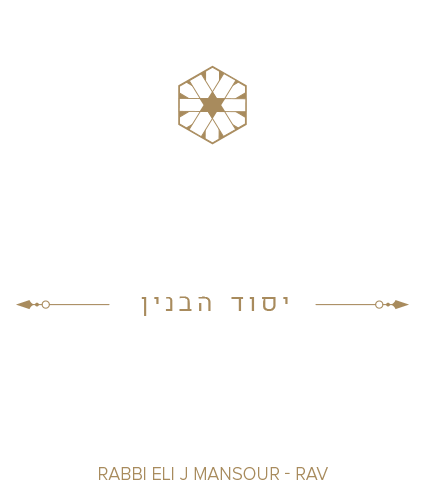 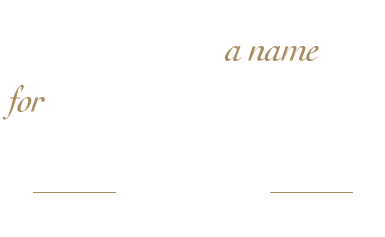 FROM STRENGTH TO STRENGTH

In response to the beautiful growth of our international audience, The Edmond J. Safra Synagogue, under the auspices of renowned orator, educator and scholar Rabbi Eli J. Mansour, has undertaken and initiated the ambitious project of erecting a new permanent sanctuary at the corner of Avenue U and Ocean Parkway in Brooklyn, NY.

After being hosted under lease for a number of years, the time has finally arrived for our cherished Synagogue, Torah scrolls, inclusive study programs, and all-new catering hall to come into their own in a place both Hashem and our congregants may call home.

While generous individuals and family sponsors have already reserved many of the new Synagogue’s title items, we are opening this unique campaign to the public to afford everyone the remarkable lifetime opportunity of partaking in a group sponsorship. 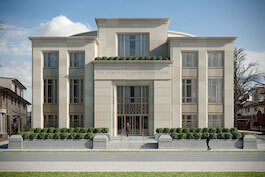 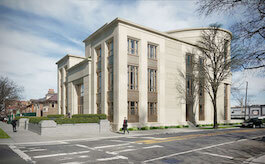 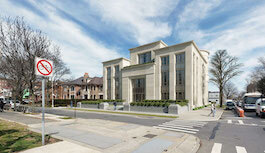 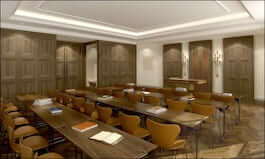 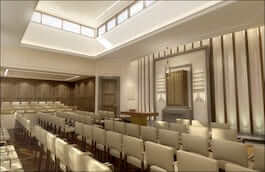 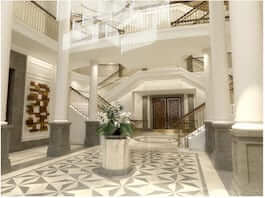 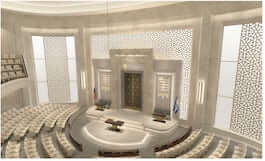 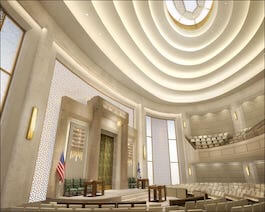 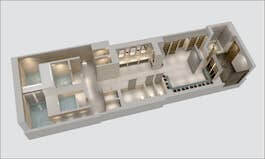 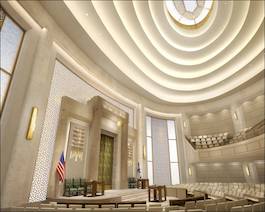 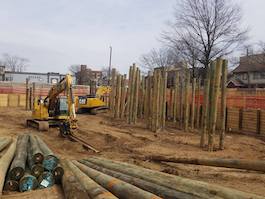 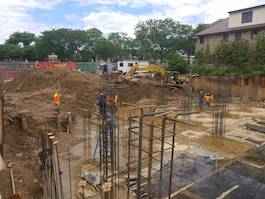 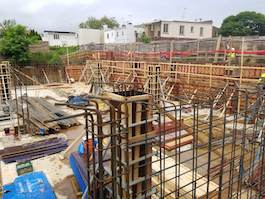 Akin to the adanim (sockets) underpinning the mishkan (Tabernacle), which were cast from the silver half-shekels of the Jewish public, the meritorious opportunity to fund the Yesod HaBinyan (building foundation) of the gorgeous new Edmond J. Safra Synagogue belongs entirely to our greater global congregation.

Rather than accept a large donation from one wealthy individual or shevet (tribe), Hashem elected to erect His portable sanctuary on a base of smaller contributions from the many.

THE LESSON IS CLEAR:

A house of God that sits on a foundation of unity and love will forever stand tall.

Our goal with the Yesod HaBinyan campaign is to obtain all necessary commitments within 12 months.

Donors can commit to one of three participation levels, and effectively contribute an equal monthly amount for the coming 26 months.

Your dedication will be prominently and permanently displayed on a special plaque in the main floor lobby of the new building as a Meyased, Tomech, or Ozer.

Your gift: R’ Mansour’s 3 beloved books, personally inscribed by the Rabbi, plus a $500 credit for downloads on iTorah.com

Your gift: R’ Mansour’s 3 beloved books, inscribed with record of donation, plus a $200 credit for downloads on iTorah.com

Your gift: R’ Mansour’s most beloved book, inscribed with record of donation, plus a $50 credit for downloads on iTorah.com

All donations are recurring for 26 months.

During the early part of the 20th century, Sephardic Jews began emigrating from Syria to the United States. They originally settled in the Manhattan’s Lower East Side, but later moved and established themselves in various neighborhoods in Brooklyn. While creating a community in this new land, these immigrants took great pride in their origins in their native city of Aleppo (Aram Soba, Halab), which was home to a vibrant Jewish community for thousands of years. They set as their highest priority the need to maintain the values and customs which they brought with them from the old country. Synagogues and Yeshivot were built to imbue within the next generation a love and appreciation of their spiritual heritage, and a commitment to perpetuate it on American soil.

It is into this heritage that Rabbi Eli J. Mansour was born.

Rabbi Mansour is the oldest of five siblings born to Joseph and Rochelle Mansour, both of whose grandparents came to the United States from the Middle East. When young Eli reached schooling age, the obvious choice for a school was the renowned Magen David Yeshiva, which was founded by the Rabbi’s great uncle, the esteemed Mr. Isaac Shalom A”H, with the purpose of promoting Syrian Sephardic culture. There he studied Torah and absorbed the richness of our heritage from noted Rabbis such as Rabbi David Bitton A”H, and Rabbi Moshe Greenes A”H.

However, the figure who had the most significant impact on the Rabbi’s development was Rabbi Baruch BenHaim A”H, our venerated community leader, who, as it so happened, had also taught Rabbi Mansour’s father in the same school. Rabbi BenHaim imparted to the young Eli the glory of our heritage as well as our community’s commitment to Torah. The Hacham also became the Rabbi’s address for Halachic questions and spiritual guidance.

Rabbi Mansour continued his education as one of the founding students of Yeshivat Shaare Torah High School, where he was guided by his Rosh Yeshivah, Rabbi Hillel Haber. After graduating from Shaare Torah, he studied at Jeursalem’s Mercaz Hatorah, and then in the Bet Medrash Gavoha in Lakewood, New Jersey.

After marrying his wife, he moved back to Brooklyn where he was offered the position of Rabbi at the Ahi Ezer Torah Center. His outstanding scholarship, clarity of presentation, magnetic personality and ability to relate to people of all levels of observance combined to make him an exceptional teacher and leader, who could show Jews from all backgrounds the joy and fulfillment that can be achieved through a Torah lifestyle.

His rigorous schedule includes an early-morning Daf Yomi class, a daily Halachic discourse, an Ein Yaakov class to businessmen, and regular lectures at Ilan High School, in the synagogue and in the homes of community members. But for his many students and followers, the highlight of the week is Rabbi Mansour’s Shabbat morning and Shabbat afternoon drasha, which consistently draws more people than seats available.

The popularity of his lectures has spread far and wide. Recordings have been distributed throughout the world, and he is among the Torah world’s most sought after speakers, throughout the United States and in communities around the globe.

The Rabbi’s popularity is also attributed to the popular web sitewww.DailyHalacha.com, where the Rav orates a 3-5 minute Halacha each day asking the most pertinent questions of the times, and includes sources and a bottom line summary. DailyHalacha.com which started in 2000 was soon followed with www.DailyGemara.com (Daf Yomi taught by Rabbi Mansour), www.DailyTehiilim.com, www.MishnaBerura.com, www.PeleYoetz.com, and many others. But rather than keep this evolving medium to himself. The Rav opened up his web sites to the other prominent Rabbanim of the Sephardic Community, and today serves as the Mashgiach to its resulting world renown and amalgamated Judaica web site; www.iTorah.com.

Rabbi Mansour is currently the Rabbi of The Edmond J Safra Synagogue in Brooklyn, New York, where our rented facility hosts more than 500 congregants on any given Shabbat and scores more during the week. Further, it is at this venue, where Rabbi Mansour leads a team of dynamic Rabbanim providing classes to men, women, and children of all ages, every single day and night. Rabbi Mansour is proud to serve as leader of a Kollel Hasot program, where 20 men learn every single night from midnight to dawn. In addition to the Judaica learning and prayer, the Rabbi leads the Congregation in many Hessed campaigns throughout the year providing for the needs of the oppressed and unfortunate. For the last several years, the Rabbi has led the Congregation in fund raising efforts and has been able to distribute more than $300,000 per year since 2015. The Rabbi and Congregation also have a Gemah Fund where interest free loans are provided to Community members in need.

B”H, with the help of The Edmond J Safra Foundation and so many other generous donors, the Rabbi’s Congregation was able to purchase a large property in the heart of Brooklyn’s Sephardic Community. It is our hope and prayer that we be able to complete this structure by August 2021. We have outgrown our rented building, and we need to also accommodate young adults, for whom we simply don’t have space for at this time.

The building represents our loyalty and commitment in the service of Hashem. It is in this structure where our traditions will be passed down from generation to generation. It is in this building where we can guarantee continued perpetuation of our religious ideals and value. It is the wish of Rabbi Mansour all the current Congregants that their children, and all Jewish children around the world, should follow the Torah’s timeless exhortation, “She’al Avicha Ve’yagedcha Zekenecha Ve’yomeru Lach” – “Ask your father, and he will inform you; your elders, and they will tell you” (Debarim 32:7), that they will always look to their ancestors for guidance and inspiration at every stage through their winding journey through life.