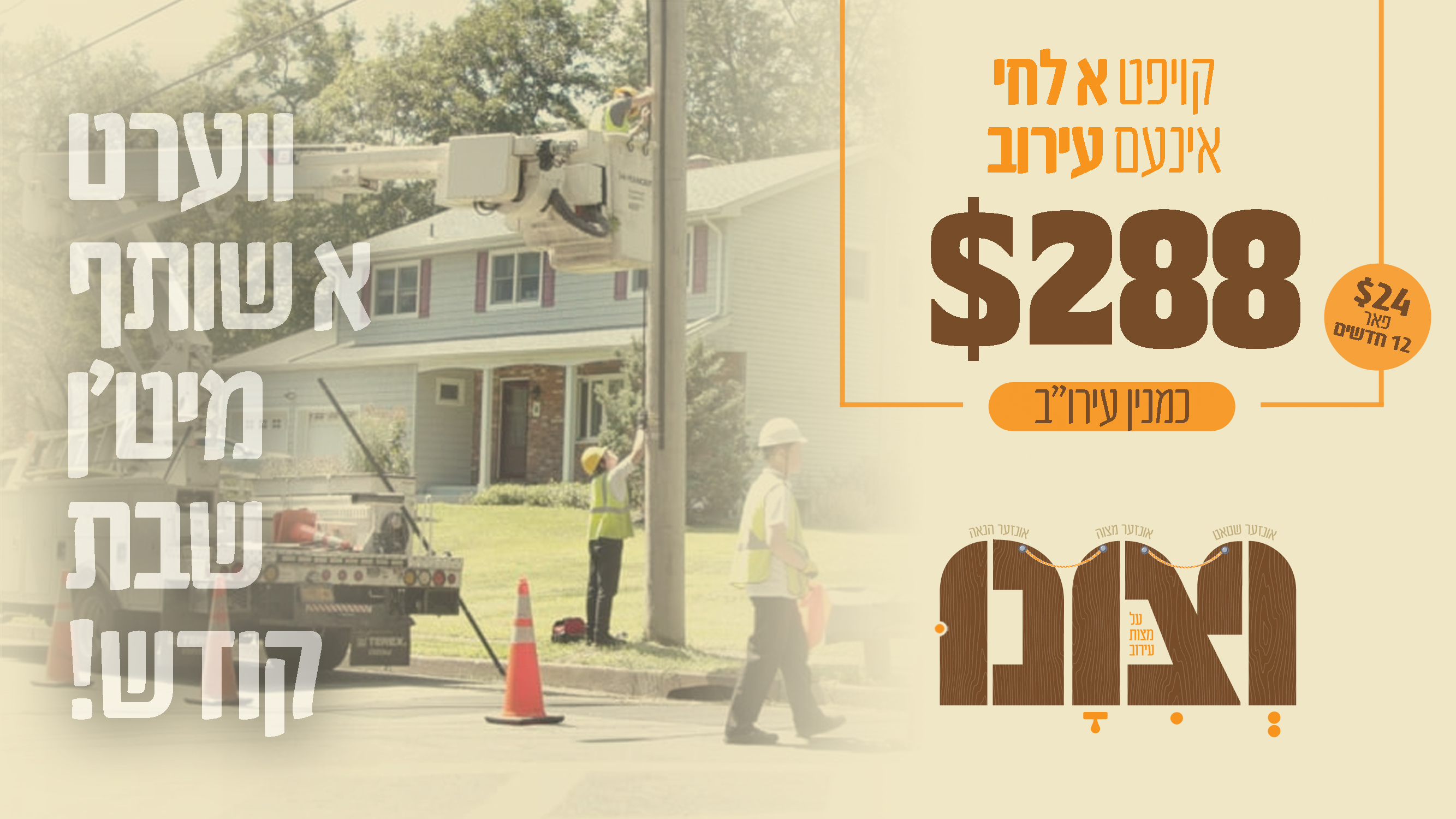 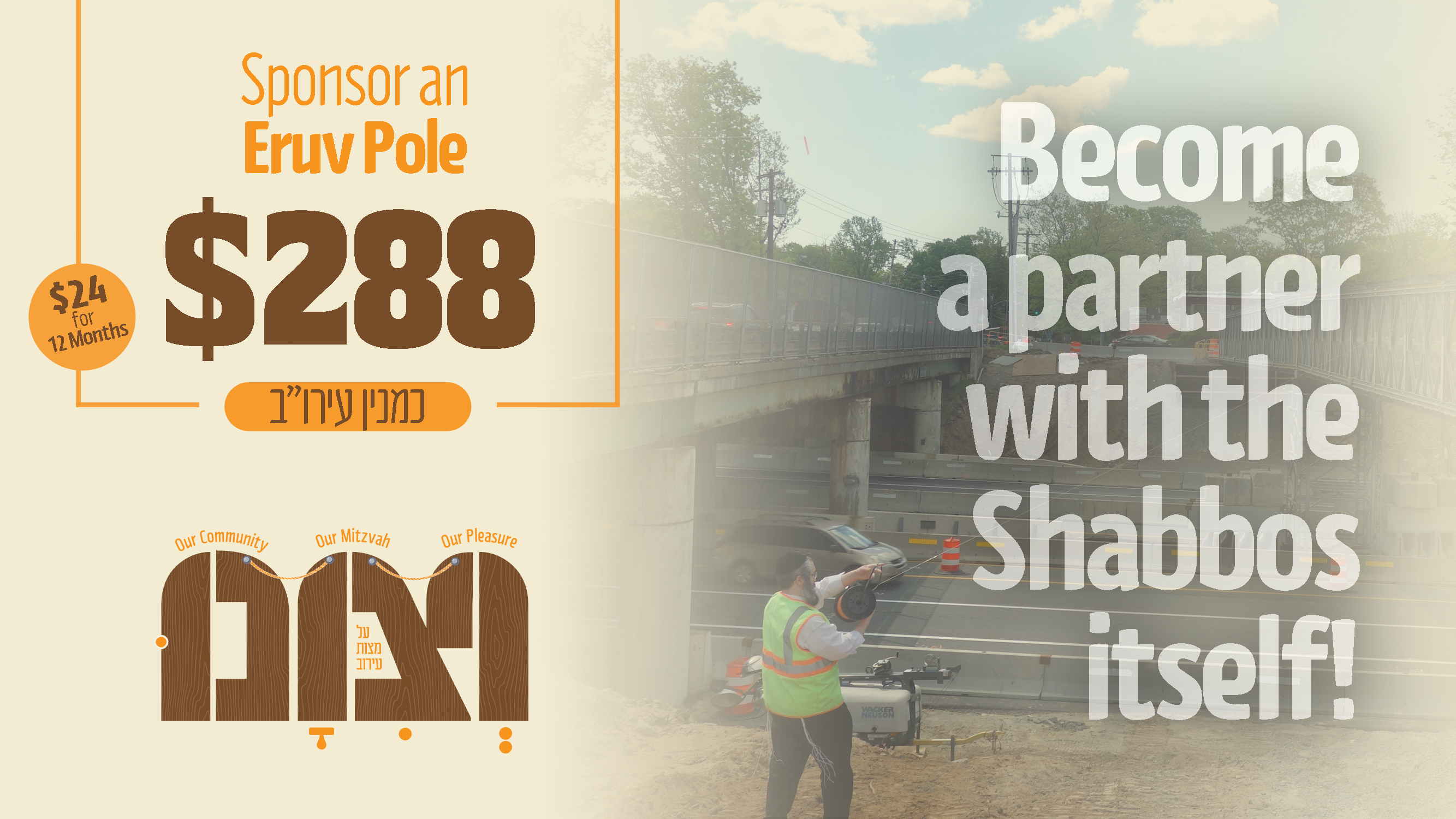 “ATTENTION MONSEY RESIDENTS! THIS SHABBOS THERE WILL BE NO ERUV!

BE FOREWARNED NOT TO CARRY ANYTHING OUTSIDE YOUR HOMES!”

Oy vey! I was supposed to eat the seudah at my parents’ home…

Oy! Zeidy won’t be able to go to shul…

How will we go to my brother’s aufruf? I need to take the baby…

…And so on and so forth…

Every single Yid, every single Shabbos derives tremendous pleasure and enjoyment from the eruv; we come, we go, we take, we bring… we don’t even realize how many times we make use of the eruv EVERY SINGLE Shabbos.

However, does it occur to anyone that behind this eruv is an entire operation consisting of dozens of people who toil day in and day out, every single week around the year to provide the community with the privilege of Oneg Shabbos?

Who builds the Eruv? Who repairs the Eruv? Who inspects the Eruv? Who ensures that the Eruv will stand tall and proud with all Hidurim, at the epitome of Kashrus every single Shabbos? It’s thanks to a small group of our fellow neighbors who pour effort, sweat and blood into this undertaking without ever giving up!

DEAR MONSEY RESIDENTS! THIS PHONE CALL IS NO JOKE!

THE MONSEY ERUV IS AT THE BRINK OF COLLAPSING!

The community has B”H vastly expanded. The posuk “ופרצת ימה וקדמה צפונה ונגבה” has come true before our very eyes. As a result, the Eruv has been expanded in every direction. What hasn’t changed is the original infrastructure and system of building and checking the Eruv. This is causing the entire Vaad Ha’Eruv to collapse under the growing burden.

The Eruv is so huge to date that should there be a serious storm and there would be serious damage on opposite ends of the Eruv, it may be impossible to have it all repaired in a timely fashion to ensure it would be ready for Shabbos.

It is imperative that the existing infrastructure be expanded to accommodate the needs of the existing community.

We pay our utility bills because it is self-understood that if we use it we must pay for it.

Dear Brothers, Eruv is a utility like all other utilities! We use it and we must all pay for it so that it can continue to exist.

You can now grab the opportunity to have a part in the mitzvah of Eruvin by sponsoring an Eruv Pole for a mere $288. By doing so you will be putting the Monsey Eruv back on its feet so that they can continue to provide you with Oneg Shabbos every single week.

In this zchus you will surely be blessed with all the Brachos that Shabbos Kodesh brings along, “Ki Hee M’kor Habrocha, as it says "כל המענג את השבת נותנים לו נחלה בלי מצרים, אמן".

Comments: Dealing with u a few months ago was a true pleasure